skip to main | skip to sidebar

A Funny Thing Happened on the way to.....

Its all to do with my new obsession.  I've been getting more and more frustrated by the lack of just the right colour for my afghan blankets.  The colour might be right but the shade is too dark or too light or its a bit too red or too blue.  You know what I mean.
I usually buy my 8ply (dk/Light worsted) from the Bendigo Woolen Mill which does have a really good range to choose from although I think they are a bit lacking in the orange/yellow shades and not enough brights.  But their quality is good and consistant; the price is really good and the wool comes in 200g balls which is an absolute bonus for people like me who are allergic to sewing in ends.

I decided to start dying my own wool.

A Simple statement with so few words but boy did that open a huge learning curve for me.  My only previous experience with dyeing was a term spent doing an organic chemistry option on natural dyestuffs when I was in Yr 11 at Secondary school.  Lets just say that was a lot of years ago.


My first approach was to go to the internet and find any information I could on the subject. That led me to thinking that I would use synthetic dyes rather than the natural ones as they are easier to get reproduced colours with and in terms of toxicity they are pretty much on a par with the mordants needed for the natural dyes.


More reading and lots of hours later (with books on the subject being added to the mix) I started searching for the equipment that I needed.  Oh how I envy the crafters in the US sometimes. Trying to get some of the equipment that I've read about is impossible to get locally and the shipping/postage would make this an expensive hobby.


Move on a couple of months and I dyed my first batch of samples the other day.  They aren't great, or even very good- but they are my first attempt and I've really pleased.  I can see the faults.  I know that the mini skeins are streaky and that most of the dye has adhered to the surface rather than sinking into the fibre but I know what I did wrong so next time they should be better.... fingers crossed.


To explain the title - well I was taking the mini skeins out of the dye baths and putting them in the sieve and rinsing them.  At the same time I was talking to Mr Anti-Chaos so was a little distracted.  I poured the 4th batch of 6 into the sieve and a lot splashed up, so I quickly mopped it up because I didn't want to add grey to the blue and spots of red I had already left behind on my laminex.  (It didn't hit me as strange that the liquid was still grey).  Still talking I looked back to the empty! sieve and the mind went straight into panic mode.  Where did the wool go???? Oh no it splashed out and slithered down the drain (ala spaghetti)!  What am I going to do now. Damn!
Mr Anti-Chaos asked me what was wrong in response to the dumbfounded look on my face and when I explained the problem he just laughed. Yes he laughed!  I guess it was funny.  I had forgotten to put the wool into that jar so of course there was no wool to rinse and the dye bath was still grey as it hadn't exhausted.
Anyway I have to play around with the grey a bit more to get the shade I want, this one as is is too blue.  I'll post a photo of the next lot when its done

So I have finished the blanket and have actually managed to get one or two photos to show.  (There were many others but they weren't viewable). That side of things still needs work!!
I was really pleased with how it came out.  The colours are lovely and I think it has just enough different coloured centres to bring it to life.  Loving the blending of the browns as well. 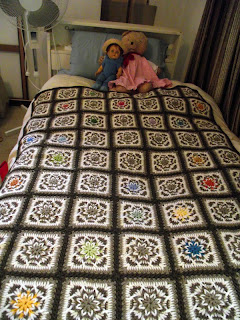 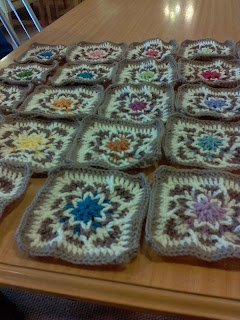 I used Bendigo Woolen Mills for the main body of the throw and some of the coloured centres.  The rest came from my stash built up from the 70's.  It was a bit sad to see how low I was getting on some of the old colours as I can't replace them.  The brights just don't seem to be around at the moment.

Anyway that led to my new obsession - but more on that later.

I've also completed a couple of short but satisfying projects since the blanket, 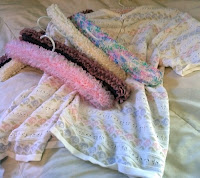 and yes I know everyones first reaction is "oh my grandma used to make them" or something similar, but its amazing how many people want one when you have finished them.  I love the covered coathangers as they don't leave that bump in the shoulder of your knitted things when you hang them. 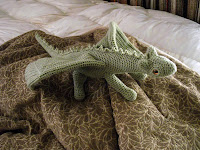 The other project was courtesy of my darling daughter Holly of Two Cheese Please. She sent me a copy of a pattern for a dragon. I love dragons. So even though I have a million other projects begging to be finished/started I just had to make this one.  You understand don't you.  I'm glad I did; he is really lovely.  Probably would have looked better in a better yarn, but thats what I had in my stash.  Now I have to decide what I'm going to do with him. I suspect he will go with the other stuffed toys I've made and eventually they will be donated to a charity. 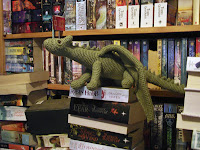 I couldn't resist posing him on that book.  Its Dragon Haven by Robin Hobb.

I guess I need to find a name for the dragon - any suggestions?
Posted by Simply Cate at 21:39 No comments:

The Granny Blanket.......
I really should have called this blog "Procrastination Central".

I've been busy crocheting my new granny blanket but I've put off blogging about it (except in my head - and you call all read that can't you!!) until I worked out how to use the sons' camera a bit better.  I also need to work out how to fix the lousy photos I do take. Photoshop is like a whole new thing with such a different language and too many ways to tweak.  I get lost and never know which is the best thing to do to fix the photo.

Anywho I do know how to crop the photos so I've got a couple that I'll put up as is.


As you can see they aren't the traditional granny squares.  Yes my old old ones from my stash are still sitting there waiting to be used. I have sorted them and gotten rid of the colour combos I just couldn't live with, so some progress has been made.

I was seduced by the lure of something new.  I found the pattern for these great squares and just got swept away in the excitement of "NEW".  Did anyway just think "easily distracted"?

I've decided to go with the brown colour way and leave the variegated centres for another day.  The pattern for the block is from the leaflet "Amazing Star Afghans" which is out of print but you can buy it from the daughter of the designer as an electronic download from www.stores.ebay.com/QueenOfAllCrafts  - Look for JAO patterns.
Posted by Simply Cate at 20:53 No comments:

I grabbed out my bag full of granny squares that I had started back in the seventies for this granny - a - long and not sure if I will use any of them. 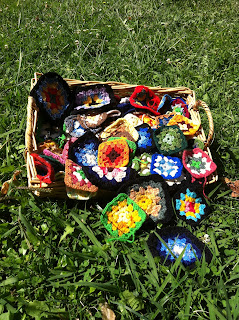 Some are very sad!
I cut the ends of the knots in some of the early ones-no going back from there.  I did weave in the ends on some later ones, but its obvious that I used 2 different size hooks to make them.  I think.... that I used a 3.75mm for the early ones and used the 3.75mm and a 4.0mm for the later ones; some of the colour combos are in the category of "what was I thinking". I also raided my 8ply stash to add to the bundle.  No shortage of wool there, but you can notice a distinct colour preference and not many brights in the lot, so although I swore I was only going to use up the stash I feel a visit to the Bendigo Woolen Mill coming up.  (you can't have too much wool can you)???
Posted by Simply Cate at 22:48 No comments:

Everything has to start somewhere and after waffling about starting a blog. Here it is! Trouble was I was trying to be too clever and come up with a catchy name like all those fantastic blogs I see on the web.  Thats not me, I don't do clever very well.  So ... its simply Cate, the name my friends and family have called me for years.  It fits. What you see is what you get with me, don't do drama or artifice and really appreciate honesty in people.
The final catalyst for me getting off my bum and starting this is that I wanted to join the "granny a day" at http://meetmeatmikes.blogspot.com.au/2012/03/granny-day-2012.html and I need a blog address.  So a thank you for the requirement to have this address.  I'll take whatever prod is necessary to get moving.
So now to sign up for the group and start looking at how to do more than just put words up on this site.
Catch you all next time
Posted by Simply Cate at 21:20 No comments:

Simply Cate
I'm Cate - Catherine when in formal situations and my natural state is very chaotic try as I might to be organised. I’m constantly surrounded by yarn and have 1 or 10 projects on the go at a time. I really need to live to 200 to finish everthing I want to knit or crochet, and I’m always seeing new things to branch out into. Lousy at taking pictures and putting up my projects BUT with many not so gentle reminders from my crafty and social media wizz kid daughter I’m trying to fix that